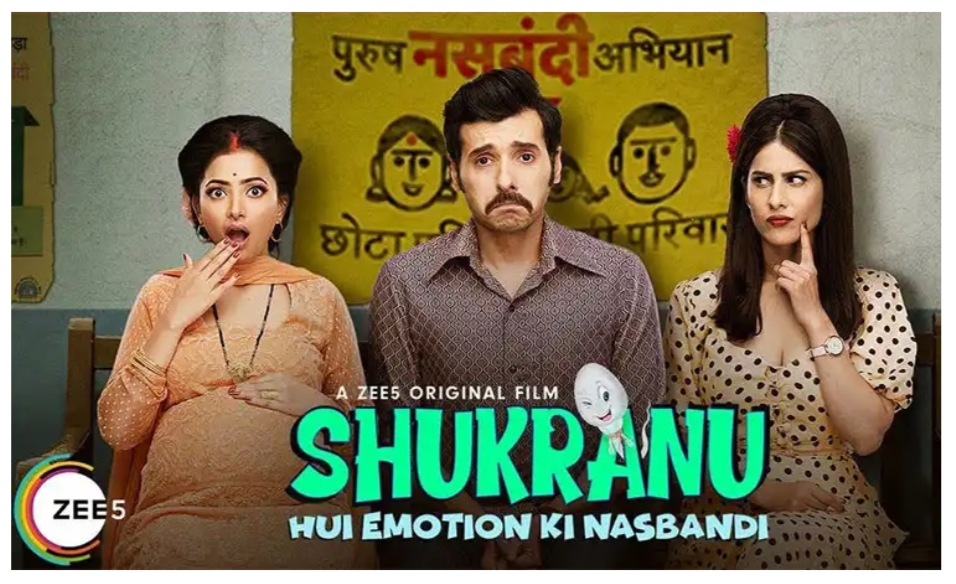 ZEE5 this Valentines brings you a very sensitive and thought worthy series that will force you to binge watch it. ZEE5 is responsible while presenting interesting stories related to the well-being of society and presenting the new picture of society as it ought to be. Shukranu is a film by Bishnu Dev Halder and shows the brutal side of forced sterilization during the Emergency period. Though the movie has a very sad and depressing matter but then with interesting presentation it gets converted in to a very hilarious subject. 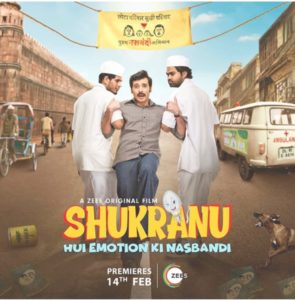 The tag line of the show itself says “hui emotion ki nasbandi”. The story is super interesting and picks up a topic from 1975’s where due to the side effects of over population the government makes sterilization a compulsion. He film is set during the period that is termed as a “dark period in the Indian history”. The matter is grave but then the makers and the actors have made it romantic comedy that will leave you rolling with tears.

The comedy of errors plot-
The actors in the show are Divyenndu, Shweta Basu Prasad, and Sheetal Thakur. The story of Shukranu focuses on Inder (Divyenndu), a man who is working as chief supervisor at a factory in Delhi during the emergency period. He falls in love with a girl Akriti (Sheetal Thakur). The fellow goes back to his village to marry a girl selected by his parents. This girl is Reema (Shweta Basu Prasad). Here is the point where comedy of error begins and the plot takes interesting twist whereby just two days prior to his marriage he is forcefully taken to a sterilization center and is made to get a vasectomy. Inder is perplexed and ashamed at the same time and decides not to tell anyone about the vasectomy and his awkward situation. Thus in the awkward situation he gets married leaving the audience with pangs of laughter. The matter doesn’t end here it is a situation where for the negligence we need to empathize with him we are all laughing with tears in eyes.

What follows ahead is a total surprise and keep the audience glued to the screens. Inder is shocked to realize that can still have intercourse with his wife and is relieved as his manliness will not be doubted. However the irony of the situation is that Reema is already pregnant and this situation totally agitates Inder but leaves the audience bursting with laughter. Adding plethora of twists to the situation, Akriti also wants to marry Inder as she loves him and is unaware of his marital status. Inder also wants to marry her for love and for the reason that he feels that Reema has cheated on him and got pregnant.

The topic is picked up from 70s and 80s but is relevant and entertaining even today. The movie takes a fresh dig on the dark comedy of the Indian politics and democracy. The film has its subject as forced sterilization and its ill effects but then makes it interesting and light with the apt presentation. In spite of humorous interpretation of the matter the message reaches the audience and leaves them enriched and informed with the aspects that has evolved the Indian political status.

ZEE5.com as usual brings a very interesting and sensitive matter for its audience with great respect. The series breaks many norms and myths. After vasectomy when Inder gets married and looks after ways to improve his sex life. A doctor clearly tells him that in no way his capacity is reduced. The topic deals with male vulnerability with great sensitivity. The main characters and the support that is the family members make the plot very humorous. Two girls are in love with the same sterilized man makes the plot very humorous. The series in enjoyable yet without deviating from the dark side. The dark aspect as how the rich and powerful reversed their operations and how the poor had to give in the system and accept a compensation of 200 INR, a box of ghee and an alarm clock. The story shows the evil side of medical field where, how did the doctors performed 100 operations a day and no one was held accountable for the deaths or forced operations.

The characters have done an awesome job in their characters and kept the audiences hooked without boring them for a while. The two female leads are totally opposite to each other representing the two pictures of ladies from village and city. The story shifts effortlessly from drama, comedy, romance, and dark aspects very fluently. The backdrop of 70s adds depth to the story. It is a must watch movie for a roller coaster of entertainment.

15 thoughts on “Sterilization: shukrana or not – Shukranu movie review”